The Luck Behind the Shamrock Name 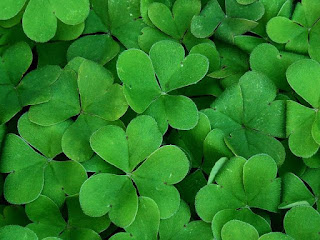 If you’re lucky enough to be Irish, then you’re lucky enough. That’s how I felt growing up in an Irish family—and as an adult, I feel equally as proud to be part of an organization that shares a bit of that heritage.
I get the question often: How did Shamrock get its name? So today, on St. Patrick’s Day eve, seems like the right time to share the story: In 1978, Shamrock founder Neil Bennett took a leap of faith, leaving his secure sales position at a major business forms company to start an entrepreneurial venture.
The story follows that as Neil sat at his kitchen table contemplating his new startup, he studied the shamrock plant sitting in front of him. It brought back childhood memories of shamrocks displayed in his grandmother’s home. And that’s when it hit Neil: “why not name the company SHAMROCK, the legendary good luck symbol of the Irish?”
And so, Shamrock Forms was born. Working from that same kitchen table, Neil’s sales grossed $400,000 the first year. In less than two years, he rented office space, hired four employees, and sales grossed $1.2 million. And the rest is history, with the Company growing and diversifying to evolve into the full-service marketing solutions resource that it is today.
Shamrock didn’t stumble upon that success by luck. It’s no coincidence that successful people, like Neil, who work the hardest and surround themselves with good people, seem to have the most luck. I’ve always believed that we create our own luck—and Shamrock is living proof of that. For more than 30 years we’ve focused on serving our clients first by providing added value, and the rest has certainly followed.
May the road rise to meet you.
And may you enjoy the holiday tomorrow, snow and all!
Tim Connor
March 15, 2017
Share this post
Share on FacebookShare on Facebook TweetShare on Twitter Pin itShare on Pinterest Share on LinkedInShare on LinkedIn Share on WhatsAppShare on WhatsApp

Cleveland’s Champions in the Community Event Is A Big Win
October 30, 2019

A simple secret to delivering great service
May 15, 2019
Subscribe To Our Blog